Should I Learn Hungarian?

Sunday, October 16, 2016
I like Windowsphone. I use a Lumia 950 right now as my daily phone. However there is no doubt about it that Windowsphone users like the product better than Microsoft. Microsoft are in full on "abandonware mode" with the platform in intensive care for a variety of reasons too numerous to go into. My Lumia still has a great camera and even with all the hot air about Apple's "best camera on any iphone" and Google Pixel's "best camera on any smartphone" the 950 has a superb Zeiss lens and 20mp pictures despite being last years' flagship.

However I do miss the apps. My bank doesnt even have one. So I have a Samsung Galaxy S6 that occasionally use. The problem is that Samsung has done something that PC users has been hit with for years - crapware. You buy a new PC, or a Samsung device, and it's filled with apps to "help you". Apps you never use except by accident and wish weren't there. In the Windows world most, if not all, uninstall. If you are an IT Pro you can even do a whole clean install on a PC. Not so with Samsung. The official Samsung phone comes with built in crapware you can't remove unless you download and root the device. You can remove it a bit but it sits there as an update. If you press update all then it comes back.

My problem is a bought my phone from Ebay. Actually that overstates it. I bought a brand new device at a decent price as a European phone from Ebay. By European I mean unlocked and working well except for one thing. It was destined for the Hungarian market. After setting the default language to English all worked well and there is literally no problem except for the crapware. 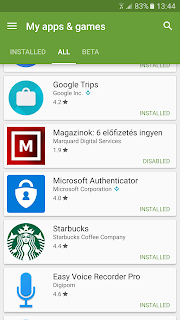 The crapware deal Samsung has done in Hungary seems to be some kind of electronic magazine or newspaper. Every so often I get asked to update my Hungarian magazine.

I can't remove it unless I root the phone and that is lot of effort to remove just one app. I have disabled all the other Samsung crapware but this one is just vaguely irritating. It sits there in a sort of unwanted pointless way.

I do feel guilty that I can't use this app. The unwanted and slightly unloved dimension to apps you cant install is not just annoying but also wasteful of space.

The only route to liberate this app from limbo would be to learn Hungarian. That's crapware for you.
android crapware samsung galaxy