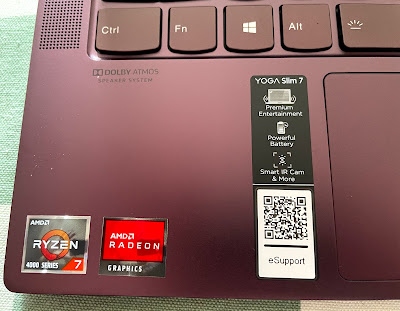 News of the release of the Microsoft Surface 4 Laptop this week also included the information that the AMD Ryzen processor would be a standard option across the range. The Ryzen processor is part of the AMD comeback story on Windows PCs and part of the story about competition with Intel.
For a long time the "Intel Inside" logo was common on PCs. Whether you bought an Apple Mac or a Windows PC the processor was almost certain to be an Intel processor. This dominance was also reflected in business. The combination of Widows and Intel literally created "Wintel" as the name for engineers that dealt with Windows servers. AMD processors, that also used the same basic processor instruction set, were the less famous little brothers. They were a favourite of builders of home PCs and gamers where they competed on price and power.
Intel processors had raw power and were originally designed to work connected to mains power with large fans to remove the heat of heavy processing. They were designed to have large heat sinks to distribute the heat of heavy duty processing. However, the last decade has changed the way computers are used. The world has gone mobile. Chips in mobile phones are now designed as low power using batteries. Their design reflects an always-on, always connected world. Networking has gone mobile. A new generation of chips based on ARM designs are in almost every mobile phone. Intel has been stuck in the the world of previous decades. They have produced new chips for laptops but issues such as instantly coming on, battery life and heat have still caused problems for the chip maker.
Intel know about the problem. They have created reference brands like Ultrabook, in 2011, and latterly EVO to provide consumers with device categories of thin and light laptops. The idea being that an ultrabook is identified as a category of laptop that does meet expectations of light, fast laptops with long battery life. Very much a response to the MacBook Air models revealed by Apple.
However, Intel has been squeezed as a processor maker. Apple have created their own silicon for their latest generation of laptops. Android phone makers have settled on ARM processors from Qualcomm, MediaTek, Samsung and others. AMD have jumped ahead producing a range of powerful PC chips to directly take on Intel.
In 2021 the AMD Ryzen is the mobile chip that delivers more power and more battery life on a Windows laptop than Intel PCs. This is why the Ryzen chip from AMD is now an option available for buyers on many of the newest PCs. There are still Intel only PC ranges but AMD has gained from Intel's slow progress in adapting to the mobile computing world.
If you are buying a PC you should consider an AMD model because you can find them cheaper than the Intel versions, and sometimes more capable. Don't just look for "Intel Inside" anymore.
amd intel ryzen