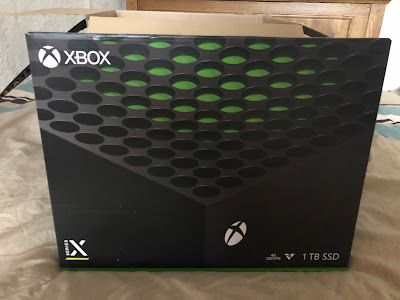 There was a time when everything was "X" at Microsoft. Internet Explorer had "ActiveX" and PC graphics were "DirectX" in Windows. Thus the "XBox" used "DirectX" and was a box of "X". A PC that could do games. It was so PC that people bought the first XBox and installed Linux on it.

This month was my big choice. Move to the Sony Playstation Five from my Xbox One or go for the Xbox Series X. I chose Xbox again. Primarily for the software.

When Microsoft launched the Xbox One the "One" bit was about being the one device for the living room under the TV. Conceptually the Xbox One would be your cable replacement, your movie watching device, your music device and you could even play games. It would use the Kinect sensor to recognise you and log you into your Microsoft account.

This had some consequences. Sony advertised Playstation as "for the players". A serious games console. As a result it sold more than twice as many. Not having a compulsory AI camera system also reduced the price. The Xbox One also had a loud fan and was the size of a suitcase. Not something you want in your living room. Worse was to come. TVs came with apps that had access to pay TV shows and music. An eventuality that meant the Xbox One as an entertainment console was less relevant.

The dream of Xbox services being everywhere disappeared when WindowsPhone failed to win any market share and Microsoft gradually withdrew from consumer services. The one consumer service remained -  Xbox.

Xbox has rebuilt its reputation by degrees. Microsoft bought games studios and even MineCraft. The cloud business that Microsoft has established is now being leveraged as a games platform. The latest incarnation being GamePass. A monthly subscription service allowing you to download and play games.

Its this latter option that swayed me. Computing is about software. Lack of apps sunk WindowsPhone but having access to a vast library of games for a monthly fee is better value than spending a lot of money to own games. With Netflix for TV and Spotify for music the consumer is now comfortable with the monthly subscription model.

Xbox Series X seemed to me to offer the best value proposition of the new era of console gaming.