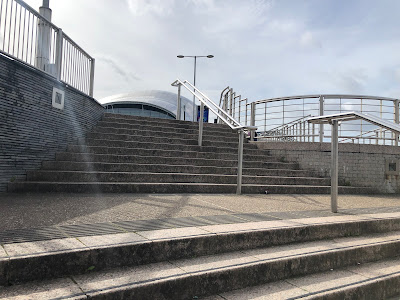 Catalina is an island off the coast of California. It’s also the name of a version of the MacIntosh operating system. Catalina was released on 7th October 2019. It’s version 10.15 of a series of operating systems known as OS X.

As a Windows user, both professionally and personally, I am more used to the twice a year updates of Microsoft Windows 10. These updates have a less memorable name. Currently called 2004. By which we mean the 2020 month 4 update.

My recent purchase of a second hand Macbook from Ebay was a Mac released late in 2009. One thing I had to figure out was what version of Mac OS X would work with this computer. In the world of Windows a 2009 PC of the same age would probably come with Windows 7. Windows 7 itself, to business customers, had a 10-year life span. The Mac would work with High Sierra or version 10.13. This was released in September 2017 and is still supported.

My Ebay Macbook cost £159.00. A further £28 got me a 250GB SSD. For under £200 I now had a working Macbook. Not the latest but a decent computer that could do a bit of wordprocessing, web and email. The screen was OK but it doesn’t have great viewing angles. The dual core processor is pedestrian but is helped by the fast disk.

What more could I do? Could I get this MacBook to run the lastest OS?

The answer is yes!

It is unsupported on this Mac but you can get Catalina to install. It needs to be patched and it is not a supported configuration. However, my Ebay Macbook was bought as a bit of fun. As an excuse to learn. I am going to do some Python programming on it at some point if it can take the strain.

The installation requires a patch file application. There is a website to help with this. I had to make a special Catalina installer usb to boot the system and do the install.

It was a really slow process. Mostly because of having to download and create operating system images. Exactly what I expected. Once it booted the Macbook worked pretty well. I now have a 2019 operating system on a 2009 MacBook. Not bad.

Can I improve this MacBook even further?

The answer is again yes!

Although the MacBook has a supported maximum memory of 4GB you can actually upgrade it to 8GB. At least that is the rumour. I have ordered 8GB of memory from Amazon for £28. If all goes well for just over £200 I will have a reasonably usable old MacBook. Not the best. Not even a UK keyboard. However, as a project to find out more about OS X as a project to home repair a Mac it is not a bad price.