A steak bake and a coffee with Bitcoin

Sunday, August 27, 2017
Greggs is a north east institution. From a small bakery in Newcastle in the 1930s and delivery via bicycle it is now all over Britain. Coffee, sandwiches and the famous stottie cake.

Greggs history has been about adapting to change and you can now get a Greggs app for your smart phone to pay in-store and collect some rewards.

What about going really out on the edge and buying Greggs with Bitcoin. A few years back I picked up a few Satoshi* just to see how Bitcoin worked. For me it was a computer science experiment rather than a serious financial transaction.

You can see (above) just how small a Satoshi is and my lack of an actual single Bitcoin puts me at the bottom of the Bitcoin millionaire scale. However if I read the casual comments of the Internet it seems that Bitcoin users only want Bitcoin to buy drugs. I suspect cash is much easier for that task but let me play along with the myth.

I wanted to know if I could buy a Greggs steak bake and a coffee with Bitcoin. Surprisingly it turns out you can!

I found Giftoff - a website you can exchange Bitcoin for gift cards. With your gift card you can buy a steak bake and coffee. 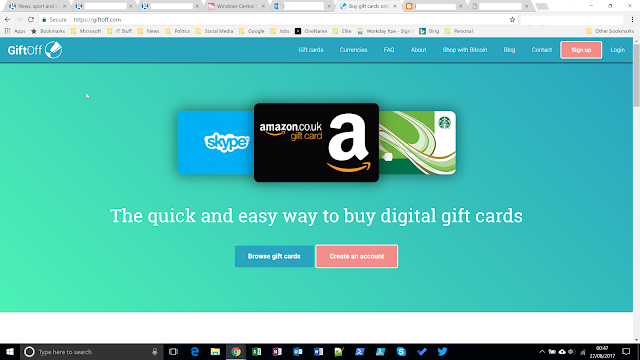 So I bought a Greggs gift card. What you get is a code that is basically the same as the Greggs app generates. When you want to pay just ask the cashier to tap in the code as if it's on the app and you get your steak bake.

Now with the rising price of Bitcoin it looks like lunch is now paid for a few weeks.

Having said this the activity is pretty pointless for normal people because money works just as well. However as a bit of fun with digital cash the temptation to try and buy at Greggs was a challenge I had to try.