Showing posts from September, 2015
Show All

Is that Ipad Pro for work or play? 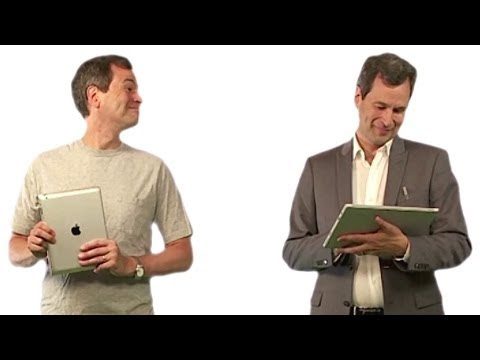 So Apple announced the all new iPad Pro . With optional keyboard and 'pencil' you can have a system that looks like a laptop. In order to convince people you can do real work on an iPad Pro, and not just watch movies or play music, they recruited Microsoft to demonstrate iPad Pro running Microsoft Office . However what it really looked like was a Microsoft Surface Pro 3 . The interesting thing here is that when Steve Jobs first introduced the iPhone he comprehensively dismissed the 'stylus' or any kind of pointing device in favour of the finger. He also comprehensively made Apple a product of the premium consumer. A product bought as much for fashion than as technology. So why would Apple want to park the iPad onto Microsoft's home ground of productivity and usefulness as a PC? One answer  - sales. Ipad sales have been in decline. Once people buy an iPad they tend not to go on a binge of annual upgrades. Apple is now into the guerilla tactics of taking t
Post a Comment
Read more

Upgrading the Lenovo Y50 with a few surprises

I have a Lenovo Y50 laptop. It is towards the top of the laptop range. I needed it because it had a hi-res Nvidia graphics card for games and a generous 16gb memory and a i7 processor. To be fair it was probably what an average Apple MacBook would cost. What I didn't expect was probably the slowest SATA hard drive in the world - or at least that's the way it felt. One of the problems of a power PC or power laptop is that when you have one slow component you really notice the bottleneck in the chain. Booting the machine or just loading a program seemed to slow everything down. The 1tb drive was a 'hybrid' with an 8gb cache but you would hardly know with the pedestrian speed of the rest of the drive. I just couldn't take it anymore and I bought a Crucial 500gb SSD. For most people a 1tb drive is hardly needed anymore because cloud storage allows you to keep your 'stuff' somewhere else. Mostly this is on OneDrive for me but I also have a DropBox and
Post a Comment
Read more
More posts